December 7, 2016.  In middle-school science class, we’re learning about chemical reactions and catalysis with a very quantitative bent. We’re synthesizing ethyl acetate from a balanced (equimolar) combination of ordinary alcohol (ethanol) and acetic acid, with some sulfuric acid as a catalyst.  We heat the mixture with heating tape, controlled in heating rate with an autotransformer.  We’ll distill the ethyl acetate from the mixture in the next period of our science class.  Teacher Dr. Vince Gutschick reviewed the theory of distillation, with calculations of the distillate composition over time.  The claim is that the odor of ethyl acetate is that of pear oil, but in concentrated form it smells like (and is) nail-polish remover. 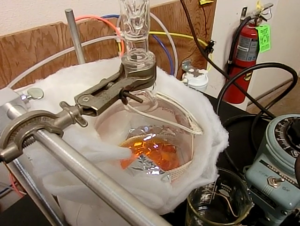 In mid-April all our students but one brand-new student took the Iowa Assessments Form E. These are national-standard tests, each set for a grade level. We use the tests to assess how well we are Read more…

James and the Giant Peach

May 21, 2022.  In the culmination of more than a year of preparation, students in grades 3 through 8 presented the full-hour play, James and the Giant Peach, based on the story by Roald Dahl. Read more…

A year in pictures and stories

All year students and teachers have been gathering pictures and stories about our lives in the Academy. Students then worked with former teacher Kelly Lin (now in California) to create this year’s yearbook.  It’s full Read more…